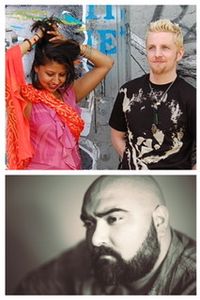 - Reena Shah on Keys and Vocals

Todd Michaelsen celebrates his musical journey with a Twin-Single Release party February 22, 2020 at NUBLU 151. Previously known as My Pet Dragon, Todd is launching the new phase of his career with intense songs and a full band. His wife, Actress-Singer Reena Shah, aka @DancingReena, will also be joining him on-stage. The night will mark a return to form and beyond for the songwriter, multi-instrumentalist, & producer. Todd’s original songs have been licensed to Feature Films, TV Shows, & National Commercials. He has also contributed original songs to artists Anoushka Shankar, Karsh Kale and Nina Paley among others.

Part crooner, part troubadour and all storyteller, Troy Ramey is pure, unequivocal soul, evoking memories with each note he sings. With unbridled emotional power, Troy has an inherent ability to reveal his pain and draw you into his music. Troy was invited to audition for Season 12 of NBC’s hit singing competition “The Voice”. Troy’s unique & soulful vocal style caught the attention of all four coaches during his blind audition performance where he turned all four chairs and ultimately chose coach Gwen Stefani. He soared through the competition all the way to the Top 12. Authentic, soulful and beautiful, Troy Ramey stands out amongst the masses as a much needed reminder that music comes from passion and sincerity.